You can fill a library with books and documents on the Ford GT40. Not so much with the car the Ford GT40 was based upon: the Lola Mk VI GT.

The aftermath of the capsized negotiations between Ford and Ferrari in 1963 was tumultuous, to say the least. Ferrari had famously agreed to sell his company to Ford, only to withdraw when the contracts were on the table. Henry Ford II famously uttered words in the line of ‘we’ll kick ‘m where it hurts’ and decided Ford was going racing at Le Mans with its own challenger. The mission: beat Ferrari.

Ford went to that other European place, just as famous for its racing heritage as Italy: England. The suits from the Blue Oval had identified two key players. Quite quickly they decided this Colin Chapman guy and his Lotus gang would be a headache to deal with: too stubborn, too unlikely to bend to corporate directives sent from Detroit. 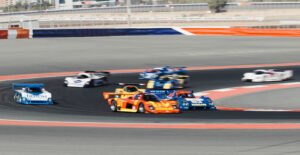 The other guy, now he seemed more interesting. We are of course talking about Eric Broadley, founder of Lola. In 1963, Broadley had finished his experiment with a closed sports car in days open sports cars were still very much the flavour of the day. He had also installed a big American V8 engine behind the driver. A Ford, no less. Of course, this project attracted the attention of Ford. Only three copies of the Lola Mk VI GT were built, and as such this became the cornerstone of Ford’s GT40 project. Initially with Broadley on board, but he resigned just twelve months into the project.

John Starkey is the owner of many books on cars and racing, including one on the Lola T70. For Veloce, he has now penned ‘Lola GT – The DNA of the Ford GT40’. The book counts 144 pages and 186 pictures. Some of the pictures come from Ford’s company archives and have previously been unseen. Next to the story on how the Lola Mk VI GT came about and how it helped Ford design and produce the GT40, the book also looks at Allen Grant’s restoration, one of just three Lola Mk VI GTs.

Available here and with other sellers.