We thought: let’s do a story on a normal car in Tazio. Only it wasn’t. In Issue #3, you can read all about our adventures in Finnish ace Leo Kinnunen’s personal Volkswagen Beetle.

It doesn’t look like much at first. But when it comes screaming at you, throwing bits of forest undergrowth around, you think differently. When you see flames erupting from the exhaust, you know for sure: there is something going on here.

This car started life as a Wihuri Volkswagen Beetle, the Finnish Volkswagen importer’s idea of a Salzburg Beetle. Many solutions from the famous Austrian rally Beetles found their way on the Finnish rally cars as well, like the dry-sump oil system or the altered air admission. This was done to make room for the twin Weber 48 carburettors on each side. In its changed configuration, the Volkswagen Beetle 1302S puts out 120 hp. The Beetle has been completely stripped, weighing just 600 kilos. 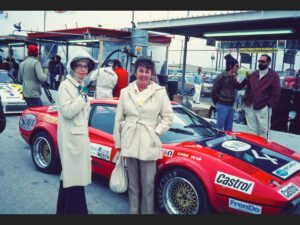 It’s an impressive package. It certainly impressed one of the fastest men around in the early seventies. Fin Leo Kinnunen had the honour of recording the fastest lap ever around the Piccolo Madonie circuit on the Targa Florio, a record that has never been beaten. He was a works Porsche driver at the time.

Kinnunen partnered Pedro Rodriguez to the world sportscar title in the John Wyer-run Gulf Porsche 917 in 1970, winning Daytona 24 on his first time out. He was hot property, but Kinnunen was also frustrated at playing second fiddle behind Rodriguez, so he left. Subsequently, Kinnunen went back to Antti Aarnio-Wihuri, who had helped start Kinnunen’s rallying career in the sixties. Kinnunen thanked Aarnio-Wihuri with three Interserie titles in the Porsche 917 for the AAW Racing Team.

Just as was the case with Vic Elford, Leo Kinnunen was an outstanding rally driver who managed to replicate his tricks on the track. He kept on rallying throughout his career. This Volkswagen Beetle was a car he had bought personally to participate in rallies in Finland.

You can read the full story in Issue 3 of Tazio Magazine.