The Group B monster that never saw the light of day

All the Fords you never knew existed

Among the many multi-million cars on offer at RM Sotheby’s Monterey sale (August 18-20), this is of course the one that sets our pulse racing: a 1994 Nissan Skyline GT-R R32, as raced in the Japanese GT championship.

This could even be a bargain. RM Sotheby’s lets the Hasemi Motorsport Nissan Skyline GT-R go without reserve, so any offer could be the right offer. Although chances are that this car will bring around 500,000 dollars. At least, that is what RM Sotheby’s hopes.

The Nissan Skyline historically had a long racing career, but most of that took place in Japan and a bit in Australia. It wasn’t until the R32 model came around, in time for the 1989 season, that it started to get a reputation. Remember, these were the days before the internet – the digital Dark Ages – so it took a bit of time before word got around. 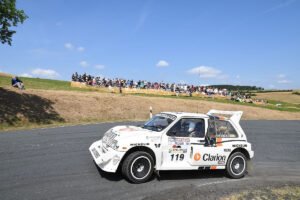 With four-wheel drive and a turbocharged 2.6-litre six-cylinder, the Nissan Skyline went on a winning streak that lasted for five seasons. From 1989 until 1993, a Skyline won the title in the Japanese touring car championship (JTCC). It became known as Godzilla.

What Godzilla really meant, only became clear when the R32 started racing in Australia and Europe as well. In Group A, it left the competition no chance. In 1991, an R32 won the Spa 24 Hours.

Today, it’s rare one of these comes available on the market. And the one RM Sotheby’s has for sale in Monterey, California during car week at Pebble Beach, is a very fine example. Entered and driven by Masahiro Hasemi, one of Japan’s biggest racing legends, this car took part in the 1994 JTCC season. He took pole and victory in only the second race it started in. Hasemi also won the Tokachi 24 hours-race in this car. He ended the season as runner-up, with the Hasemi Motorsport team taking third place in the standings.

The car remained with Hasemi Motorsport, on display with the team. After its final race in 1995, Hasemi Motorsport refurbished the car. In 1996, it moved to a private collector, who added it to his personal museum. Occasionally, the car came out for demo drives. Over the past two years, it received a mechanical restoration. The bodywork remains untouched.

Guikas sale: Get your wallets out